Long ago I learned that a broadened view of geography is less about where a place is than how it came to be—whether it be country, neighborhood, watershed, or wetland. 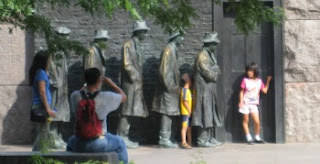 Carlos Hagen, a Chilean geographer and UCLA map librarian, was my first teacher. Actually, he was a fellow student who sat next to me in a Social Studies class at Santa Monica Community College. He was a return student who wanted a second career as a Latino youth counselor. Carlos explained that many Americans thought that geography was the study of place names, but the tradition of European and Latin American geography was much broader than that. At the next class, he brought me a paper that he had written about the singing winds of the Atacama Desert. “That can be geography,” he said.

That semester, I was also taking a physical geography with William Selby. I originally signed up because the class fulfilled a lab requirement, but Selby drew me in by his enthusiasm. Each day we came to class we found an elaborate, colorful drawing of wave action, plate tectonics, or the moon’s pull of tides on the chalkboard. During class, Selby ran from drawings on the board to a globe on a table to a map on the wall.

I learned a simple phrase that captures geography from Max Kirkeberg at San Francisco State University (SFSU). Max was a cultural geographer that drilled one phrase into his students: Things go together.

On the day I signed off on my classes at SFSU, the dean asked me what I planned to do with my degree. Would I get a job using geographic information systems, remote sensing, or work as an environmental consultant? “I want to be a writer,” I said. It was a long held dream, yet that was the first time I declared it.

As a writer, the old-school geographer’s point-of-view serves me well.  Kirkeberg’s admonition that “things go together” is always with me. It reminds me to dig into the story, deep and broad, with the winds of the Atacama desert whistling a distant soundtrack in my imagination.
Posted by Aleta George at 5:02 PM