On the Bay: DFW 150 Years on Patrol, and Work Still Dangerous

This year marks the sesquicentennial of the California Department of Fish and Wildlife.

Patrolling the San Francisco Bay has always been dangerous work, and continues to be risky for those protecting the natural resources of the bay today.

Posted by Aleta George at 1:00 PM No comments:

Hugh and Jeremy Wire grew up in a house on a hill overlooking the ocean in Laguna Beach, California. In their yard was a wheel said to have come from one of Jack London’s boats.
I learned about the wheel from Hugh’s daughter, Annette Williams, who has inherited the house and the wheel.
Curious about whether or not the wheel actually did come from one of London’s boats, I asked her to send me a photo of the family wheel for comparison.It seemed a straightforward investigation. Aside from the rowboat and centerboard skiff London skittered about on as a youth, he owned only four boats during his lifetime: the Razzle Dazzle, the Spray, the Snark, and the Roamer. We have photos of all but one wheel.
You can read about the wheel and the boat she came from in an essay I wrote for The Call, The Magazine of the Jack London Society (Spring/Summer 2021).
Posted by Aleta George at 10:55 AM No comments: 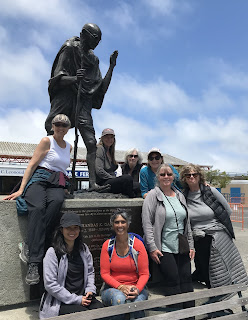 I love hoofing any section of the San Francisco Bay Trail. Whether in Pinole, Novato, or Burlingame, it is a treat to experience the diversity of the trail and the bay.

A small group of women, average age sixty, recently walked the entire thing, including the finished and unfinished portions of the planned 500-mile trail. It took them four years, and they did it by walking the segments contiguously one Sunday a month.

I first walked with them at their halfway point when I covered their adventure for Estuary News. I met them as a journalist and continued walking with them as a friend.

And now they have finished! You can read about their accomplishment in my article for the Bay Area Monitor.

Posted by Aleta George at 3:26 PM No comments:

A study published in the journal Science in 2019 found that bird populations in North America have taken a nosedive in the last 50 years. By crunching data from citizen scientist counts and surveys, scientists found that there are three billion fewer birds than there were in 1970.

One species that has taken a heavy hit is the tricolored blackbird, whose population has plummeted from several million in the mid-19th century to less than 180,000 today, according to Audubon California. In response to the population crash, a band of individuals and conservation organizations are finding creative ways to bring this bird back from the brink.

Learn more in my article for Bay Area Monitor about what's being done to save this California bird.

Posted by Aleta George at 3:46 PM No comments:

It's not an easy place to find for non-locals like me, but find it I did.
A short walk on the San Francisco Bay Trail brought me to a good spot to view the only custom-built haul out designed for harbor seals in the world, and the only spot in the East Bay between Yerba Buena Island and Newark where they haul out.

They like it. When we humans were social distancing, the Alameda Point Harbor Seal Monitors counted 86 seals piled onto the 500-square-foot raft on December 14. That's a lot of seals.

Read about it in Estuary News here.

Posted by Aleta George at 4:56 PM No comments:

When I'm hiking on a trail steeped in history, I like to think of the history as layers beneath my feet.

I contemplate the people who lived there along with the corresponding natural and cultural histories, and then with my imagination place them in layers and set them in motion all at once.

Posted by Aleta George at 12:02 PM No comments:

Today’s ferryboat commuters and recreational passengers can relax and enjoy the expansive views of the San Francisco Bay, trusting that technology will keep them safe from collision with other vessels.

In addition to traveling in designated lanes, modern ferryboat captains can rely on radar, electronic chart plotters, an automatic identification system, and backup from the U.S. Coast Guard. “These safeguards reduce chances of a collision to as close to zero as you’re going to get,” says Jim Swindler, deputy general manager of the ferry division of Golden Gate Bridge Highway and Transportation District.

These technologies were absent during the ferryboat heyday when as many as 25 ferry companies crisscrossed the bay transporting people, goods, livestock, and even railroad cars. From the 1850s until the Golden Gate and San Francisco-Oakland Bay bridges were built, a captain relied on a compass and his senses in fair or foul weather, skills that proved inadequate to prevent the worst ferryboat collision on the San Francisco Bay.

On Saturday, November 30, 1901, in tule fog denser than anyone remembered having seen, the 1766-ton Sausalito left its Marin County slip 90 minutes after sunset. Five minutes later, the 692-ton, jewel-box San Rafael cast off from San Francisco with an unusually large number of children who had been to the matinees.
Steaming against a strong ebb tide, the captains of the Sausalito and San Rafael plowed their usual routes across the bay under slow bells, a go-easy signal rung from a device on the bridge known as an engine order telegraph that communicated the desired speed of a vessel to the engine room. By necessity, captains and their crews were fluent in the language of bells, and knew the meaning of whistles blasted from other vessels that told of a boat’s location and a pilot’s intentions.

The pilothouses were dark as was the custom at night, and crew members were stationed on deck, their ears strained to hear other vessels. Somewhere near Alcatraz Island, with both ferries blasting their whistles, the Sausalito and San Rafael were upon each other. Both ferries ordered three reverse bells, but it was too late. The Sausalito rammed into the side of the San Rafael, fatally pinning a waiter in the restaurant beneath crushed timber. Another passenger, who lost an ear from a felled post, later said he’d still have two ears if he had been in the bar where he belonged.

The crews acted quickly. They tied the boats together and laid a plank so that the passengers on the sinking San Rafael could board the Sausalito. During the 20-minute rescue, the majority of the 250 passengers on the keeling boat stepped safely onto the Sausalito, but about eighty souls fell into the icy water, either upon impact or because they jumped in panic.

The ferries launched rescue boats and lowered lanterns to pluck swimmers out of the dark water. One man was close to losing consciousness before he was rescued. Another wasn’t so lucky. His life-jacketed body was found on Angel Island a few days later. Without a detailed passenger list, the number of casualties could only be estimated, with up to five people reported dead.

The San Rafael went down with her lights still burning, but the Sausalito returned to work. Four years later, Jack London transformed the infamous ferry boat accident into a dramatic opening for one of his bestselling novels, The Sea Wolf.

In 1934, a year after the bridges opened, the Sportsmen Yacht Club moved the retired Sausalito to Antioch, where the bar is still open to members.

Although the popularity and use of ferries is nowhere near what it was in its heyday, usage will likely increase due to the passage of Regional Measure 3 in 2018, which calls for an expanded regional ferry system. And when the fog rolls in, as it inevitably will, Golden Gate’s Swindler says that even with all the layers of advanced technology, ferryboat captains will continue to put staff on the bridge to “look and listen.”

A longer version of this article by Aleta George was originally published in the December 2020 issue of Estuary News.

Posted by Aleta George at 4:23 PM No comments: