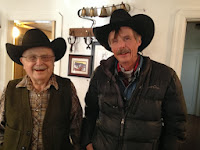 Cattleman Bill Bishop Jr. knows cows, horses, and working dogs. He and his father, Bill Bishop Sr., have been grazing cattle at the newly-protected Rockville Trails Preserve for 42 years. The elder Bishop is now 93 and retired, but he is far from retiring. He still calls himself a "suntanned, swivel-hipped cowboy."

Father and son are both cowboys—the real thing—holding onto their livelihood in the middle of swank wineries and five-star restaurants in the Napa Valley. Read about Bishop Cattle Company in "Meet the Farmer," a series of profiles I write about farmers and ranchers for Solano Land Trust.

Go to "The Bishop Cattle Company Runs Cattle and Memories at Rockville Trails Preserve"
Posted by Aleta George at 2:37 PM

I loved working on this story because it brought together my love of dance and the ocean. While I wrote it I watched the video, "Naomi Underwater," by Joseph Seif over and over again. It is mesmerizing. Jodi Lomask, the artistic director of Capacitor, discovered a new technique she calls "sink and fall" to choreograph the video.

Go to "Okeanos: A Performance Where Dancers Move Like Octopuses and Seahorses" at Smithsonian.com

Scientists Set Seashells by the Seashore

Scientists have built a biological reef made of oyster shells and eelgrass in a one-acre plot in the San Francisco Bay and are testing its ability to protect the shoreline during future sea level rise.

Read more about it in the October 2013 issue of Bay Area Monitor.
Posted by Aleta George at 1:06 PM

I have seen butterflies in San Francisco before, but it took an outing with lepidopterists Liam O'Brien and Amber Hasselbring to fully appreciate them.

Read about O'Brien and Hasselbring's efforts to protect the health and habitat for the Western tiger swallowtails in downtown San Francisco by using art and science.

The House is Yours: Sarah Ruhl's Water

In Sarah Ruhl's script for Dear Elizabeth, she gives this stage direction for when Elizabeth Bishop and Robert Lowell meet in Maine:

Suddenly the stage is full of water and a rock.
They stand waist high in cold water, holding hands, looking out.
A silence.
She turns to him.

I love the simplicity of that direction, and that Ruhl didn't back away from her vision even though the actualization of it sounds untenable. She believed that the director, Les Waters, the scenic designer, Annie Smart, and the stage crew could bring her imagination to fruition.

The resulting water scene in Dear Elizabeth, now playing at Berkeley Rep, doesn't match her directions exactly, but it does interpret it.

I can't say more or I'll spoil the surprise. What I can tell you is that underneath the stage there are two 500-gallon water tanks and a sump pump to get the water up to the stage. It takes two people on headsets to run the tank. When stage manager Cynthia Cahill gives the cue, "Go water," one of the the crew flips the open switch on the first tank. When that primary tank gets low, the second crew member opens the valve of the "slave" tank. "The set-up is very Rube Goldberg," says stage supervisor Julie Englehorn.

At intermission, the crew pushes the water off the stage to a downstage drain with long-handled squeegees. They follow up with towels. After each performance, Englehorn washes four loads of laundry.

And what does the water mean? Literal-minded patrons want to know.

In one poem, Bishop wrote, "There are too many waterfalls here; the crowded streams / hurry too rapidly down to the sea." So there's that. I asked a poet what she thought the water meant, and she said, "emotional possibilities." Another poet looked at me quizzically, "Does it have to mean something?"

Come see the water, and this beautiful and tender play that Ruhl elegantly describes as, "a play in letters from Elizabeth Bishop to Robert Lowell and back again."

The "House is Yours" is a specific term used by a front-of-house manager in handing over the audience to the stage manager. I'm a house manager at Berkeley Repertory Theatre, but please don't hold them responsible for anything in this post other than the fact that they employ me in their house built on words.
Posted by Aleta George at 2:54 PM

Fujiko Nakaya is soft spoken. I could barely hear her during our interview outside of San Francisco's Exploratorium at Pier 15, especially with a fork lift beeping behind us nine days before the opening of the science museum and the debut of her latest fog sculpture, Fog Bridge.

I leaned in to what she had to say: "Observation is imagination."

Read more in "An Artist Creates Artificial Fog in San Francisco," at Smithsonian.com.

Otters are making a comeback north and east of San Francisco, but there is only one who is stealing the show. They call him Sutro Sam because he is squatting at the Sutro Bath ruins at the bottom of the Cliff House. He has become the media's darling, and I'm just one of his many fans.

Read my story about the otter in OnEarth.
Posted by Aleta George at 11:25 AM

Song of the Meadowlark: The Sweet Soundtrack of the King-Swett Ranches

It's hard to believe you're sandwiched between the three largest cities in Solano County when you're on  a hike at the King-Swett Ranches.

Read about the King-Swett Ranches in the January 2013 issue of Bay Nature.

Learn why volunteer docent Jim Walsh has been leading these hikes for eight years. 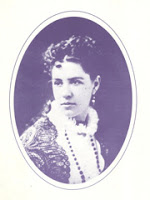 Ina D. Coolbrith was crowned California's first poet laureate in 1915. She referred to San Francisco as her "city of mists and of dreams," and shrouded her own life story with a fog as thick as that which covered the city's seven hills.

Coolbrith contributed hundreds of poems to the leading journals of her time and published several poetry collections. She counted Bret Harte, Mark Twain, and John Muir as friends, and mentored Jack London and Isadora Duncan when she worked as Oakland's first public librarian. Magazines and journals profiled her, reporters adulated her, and fans adored her—but few knew the secrets she kept. I'm writing a biography about Coolbrith and will share some of her secrets with you.

What: Ina's Secrets
When: Friday, January 11, 2 to 4 p.m.
Where:  San Francisco Browning Society