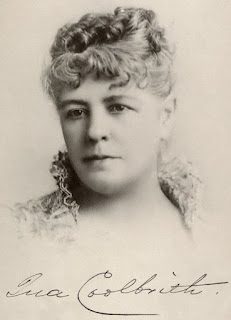 1. She was a woman of firsts. Ina Coolbrith was California's first poet laureate; the nation's first state laureate;  the first woman in America to write a commencement ode for a university (University of California, 1871); Oakland's first public librarian; and one of the first white children to come into California over Beckwourth Pass in the Northern Sierras.

"Is it right for a girl of 15 or even 16 to marry a man of 50 or 60… I think I see myself, vowing to love and honor, some old driveling idiot of 60, to be taken into his harem and enjoy the pleasure of being his favorite Sultana for an hour, and then thrown aside, whil’st my Godly husband, is out Sparking another girl, in hopes of getting another victim to his despotic power. Pleasant prospect, I must say. This, Joe, this is of God, is it? No, never, never, never!"

"...The earth may quake, the heaven fall,
The ocean fail, or (thought appalling)
I may never wed at all!
But this is certain—write it down—
Or if you smile, or if you frown,
I do not want your Mr. Brown."

5. She flirted with the idea of same-sex marriage. Ina was a little bit in love with writer Charles Warren Stoddard, but eventually came to accept his preference for men. Once she did, she turned the tables and told him that a woman had taken a liking to her. "She is as fond of me, I verily believe, as you are of Fred." She then proposed a double wedding with she and Mrs. Flint, and Stoddard and his young pal Fred.

6. She mentored the young Jack London and Isadora Duncan as Oakland's public librarian. London later told her, "No woman has so affected me to the extent you did. I was only a little lad. I knew absolutely nothing about you. Yet in all the years that have passed I have met no woman so
noble as you." Isadora Duncan wrote in her memoir, "The librarian was a very wonderful and beautiful woman, a poetess of California, Ina Coolbrith. She encouraged my reading and I thought she always looked pleased when I asked for fine books."