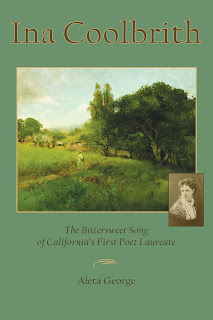 FIND AN INDEPENDENT BOOKSTORE NEAR YOU

Ina Coolbrith: The Bittersweet Song of California's First Poet Laureate is a biography about a poet, Oakland's first public librarian, and the most popular literary ambassador in the early American West.

This book follows the struggles and triumphs of this remarkable woman from her birth in 1841 as the niece of Mormon founder Joseph Smith to her death on the eve of the Great Depression. Coolbrith overcame a lifetime of adversity and achieved prominence as a contributor to the early narrative of California.

Hers is the story of adolescent California; the story of a female poet who slipped into the male-dominated literary world of post-Gold Rush San Francisco; and the story of a woman whose unrequited love for poetry (and a handsome young protégé named Carl) drove her to Roaring Twenties New York in her eighties.

Writer and editor Bret Harte called her the "sweetest note in California literature." Poet Edwin Markham dubbed her "Sappho of the West." Jack London and Isadora Duncan considered Coolbrith their literary godmother, and John Greenleaf Whittier knew more of her poems by heart than she did his. California crowned Ina Coolbrith its first poet laureate in 1915 during San Francisco's Panama-Pacific International Exposition, an honor that also made the seventy-four-year-old poet the nation's first state laureate.

"In a book marked by literary grace and conviction, Aleta George presents a nuanced yet compelling portrait of a major California figure." --Malcolm Margolin, Heyday Books

"George's prose is finely turned yet unobtrusive throughout. It is her enthusiasm and affection for Coolbrith and California that gives this biography its vitality and crystal clear resonance." --Keith Skinner, Extract(s), Daily Dose of Lit

"Coolbrith's life is so captivating that it has been waiting not just for another biographer, but for a first-rate storyteller." --David Alpaugh, Ina Coolbrith Circle

"This book is engaging and detailed in a way that draws me in, not blocks me out. I'm totally in love with the time and place of [Ina's] story." --Cal Tabuena-Frolli, Graphic Designer, The Litography Project

New comments are not allowed.